The river is a live ecosystem that has its own metabolism determined by photosynthetic and respiration processes that take place. In a river with low discharge and shallow waters (as many Mediterranean rivers and headwater streams) the main responsible for the fluvial metabolism are the microbial organisms that life adhered to the different riverbed surfaces such as rocks, cobbles, leaf litter, sediment. These microorganisms are aggregated forming a structure named biofilm, and are embedded by a matrix basically formed by polysaccharides.

Diagram of the main compounds of a fluvial biofilm.

The microbial communities (algae, bacteria, fungi and protozoa) that live adhered to the river cobbled are responsible, in a large proportion, for the water quality changes. When there is an excess of inorganic nutrient concentration (such as nitrates and phosphates) and high incident light, the algal metabolism is accelerated and this results in great fluctuations of oxygen from day to night as well as in an increase in algal biomass. When, in contrast, there is an increase in organic material for example originated as residuals from a waste water treatment plant or industrial activities that produce organic compound residuals, decomposition reactions are accelerated and the growth of heterotrophic organisms is enhanced.

Example of the daily dissolved oxygen concentration evolution in an experiment with artificial streams.

One oxymeter and one pHmeter are available to measure oxygen and pH in the aquariums. A figure with three examples of daily evolution of oxygen and pH that could correspond to the three aquariums is shown. During the workshop the students have to identify which graph corresponds to which aquarium and the punctual measurements of oxygen and pH can help on this identification. Examples of real data of daily dissolved oxygen evolution in different aquatic ecosystems are shown.

The study of metabolism in aquatic ecosystem allow the understanding of nutrient cycling (mainly C, N, and P) and the processes of transformation and recycling that take place. At the “Institut d’Ecologia Aquàtica (IEA)” research is focused on the effects of climate change (warm, drought) and pollution on the metabolism of aquatic ecosystems (rivers, lagoons) with emphasis on the relationship with diversity and structure of the communities responsible for this metabolism (biofilm microorganisms, plankton communities, benthic invertebrates).(http://www.udg.edu/iea). 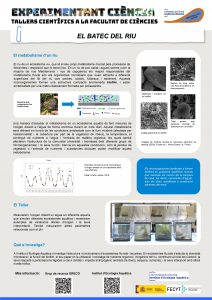