Molecular markers are one of the most used tools in genetic studies, either in forensic applications, population and medical genetics, or in the discovery of allelic variants related to illness. In this workshop DNA markers are used for individual identification from saliva, as they would be during a police investigation.

In this workshop, the typical techniques used in a molecular genetics lab are used to conduct an individual identification. These methodologies include DNA extraction, PCR amplification of the markers and visualization through agarose electrophoresis (Fig. 1). 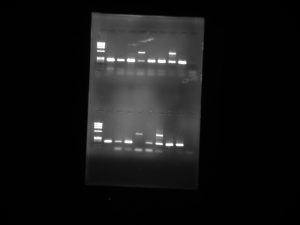 Figure 1. Agarose electrophoresis. Each lane corresponds to a different individual. Individuals 1, 2, 3, 5, 6 and 8 display the same pattern, and 4 and 7 too.

Comparing the profiles in the agarose electrophoresis, the identity between a sample and a suspect can be confirmed. Moreover, the allelic frequencies of the analyzed population can be used to quantify the reliability, and to calculate the likelihood of two people randomly coinciding. Additionally, this method can be compared to the one used by the FBI.

Molecular markers are a powerful and widely used tool. In the “Facultat de Ciències” they have provided information about the composition of bacterial populations, characterized the population structure of endangered species such as the Iberian desman, the European otter or the North African hedgehog, helped with the management of fishing resources of tuna and shrimp, and identified the genetic architecture of adaptive phenotypes in stickleback. Moreover, they are also used to diagnose cancer, describe cork synthesis pathways and even to trace human migrations leading to the distribution of the current domestic goat breeds.