HYDROGEN, THE FUEL FOR THE FUTURE?

HYDROGEN, THE FUEL FOR THE FUTURE?

In this workshop we will see how the water molecule can be split by using electric energy. As a result we will obtain two gases: hydrogen and oxygen. When these two gases are again combined, they release energy and as a product we obtain water. For this reason this is considered a clean energy. If this combination takes place in an electrochemical cell we can obtain energy in a controlled way.

This will be a demonstrative workshop in which first we will use electricity to split the water molecule and obtain hydrogen and oxygen. This process is known as hydrolysis (from hydōr, water and lýsis, break) but the process is also an electrolysis (it uses electricity, elektron, to break). We will see that the mixt of these two gases makes an explosion when there is a flame, so we must be careful. 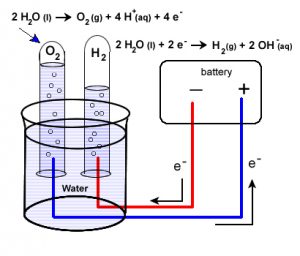 In the second part of the workshop we will prepare the same process but this time inside a cell which separates oxygen in one part and hydrogen in the other. These two gases are accumulated in two carboys. From this moment we do not need electricity anymore so we can continue without connection to electricity.

By using the same cell, the two gases are combined again by the inverse electrolysis. Now, water is formed and electric energy is released. Inside the cell hydrogen is split in protons and electrons. For this reason we need a catalyzer. The protons cross a membrane which place them in contact with oxygen, while electrons are forced to follow a circuit. At the end of the circuit, the electrons join again the protons and oxygen to obtain water. 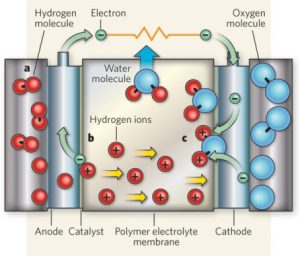 The movement of electrons is in fact the electrical current. This current is capable of make the engine working.

The engine can be small, as the one we use in this demonstration, but also big, such as a car engine or an engine in an industry process.

Nowadays a lot of research is being developing in the field of “green chemistry” with the main objective of finding synthesis processes more respectful with the environment. One of the ways is to reduce the quantity of energy needed for any reaction and save reagents. These objectives can be reached by using catalyzers.

The research at the Group of Bioinspired Chemistry, Surpamolecular and Catalysis (QBIS-CAT) is focused on the synthesis of molecules that contain metallic ions of the first transition series and that are relevant in biology. It also focuses on the design of catalyzers that allow dividing the water molecule in oxygen and hydrogen, reproducing similar reactions to that taking place in photosynthesis.

The Group of asymetric catalysis uses noble metals for the synthesis of high added value products, such as molecules that present optical and pharmacological activities. In this synthesis CO and H2 are used to obtain aldehydes optically pure from olefines. 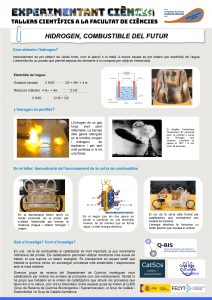